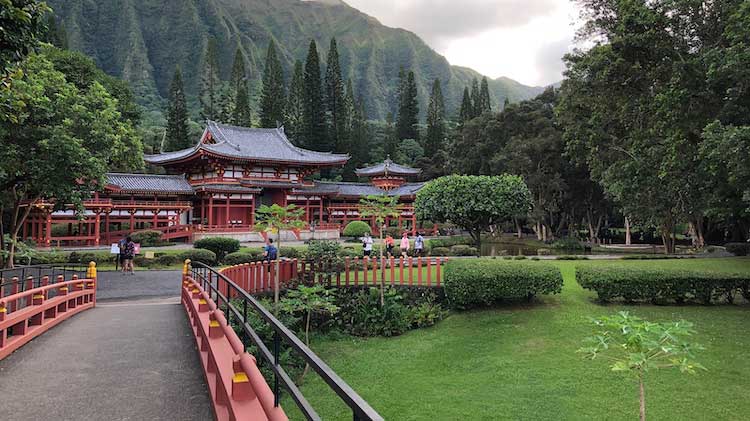 Checking out the hidden gems around Oahu is a little bit like exploring the island like a local. Why not travel off the beaten path and see what the island has to offer outside of Honolulu?

The Byodo-In Temple at the foot of the Ko’olau Mountains is an experience unique to Oahu… sort of. It’s actually an exact replica of a 900-year-old Buddhist temple in Uji, Japan. The temple was built in 1968 to commemorate the 100th anniversary of the first Japanese immigrants arriving in Hawaii. Byodo-In Temple contains an 18-foot Buddha statue, an adjacent sacred Bell House, and two acres of ponds stocked with hundreds of Japanese koi and black swans. Reserve an Oahu tour to the Byodo-In Temple and visit a little piece of Japan in Hawaii.

While Oahu is filled with beautiful parks and hikes, Ka’ena Point State Park is out of the way and a little difficult to get to, but it’s worth it. The park features secluded sandy coves, huge wide-open spaces, dramatic lava shoreline, and the little-visited Yokohama Beach.

The Halona Blowhole is a natural wonder in Oahu and a must see attraction. During high tide, water can shoot up to 30-feet from the Halona Blowhole! This is caused by molten lava tubes that were created from volcanic eruptions over thousands of years. It’s kind of like Oahu’s version of Old Faithful.

The Hawaii Islands have become world famous for our coffee plantations. While the best-known coffee is from Kona on the Big Island, Oahu has its own claim to coffee growing fame. Green World Coffee Farm on the North Shore has seven and a half acres of coffee beans, self-guided tours, an espresso bar, and retail shop.

Check out Oahu’s hidden gems by booking a tour to the North Shore and more.